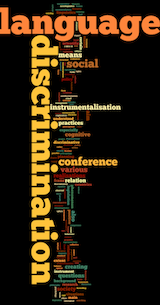 V4 Conference on Language and Discrimination

What makes discrimination unspeakable in V4 region? The main aims of the conference are to create space for discussion which reflects questions of language participation on creating social reality, on creating social and intersubjective relations with special focus on violating equality, human rights and freedoms and to interconnect the researchers in the Central European Region, especially the V4 countries and contribute to the international socioscientific discourse, whose task is to identify the discriminative practices in society and search for the means of their elimination.

Who are our keynote speakers?

Program in PDF is available here. 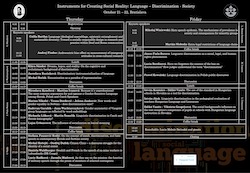 What is the main issue?

Discrimination, according to our research, is seen as a relation between two subjects, in which the ontological and axiological certainty is disturbed, and which can be observed on the level of damaging distinction, unequal treatment and disadvantage for a certain person or a group of people. The continuing anti-discrimination discourse in the public space is stimulated by acts of discrimination in our society. The conference represents one of the peaks of a complex research project which deals with language perceived as not only the instrument and means of discrimination, but also the reason for discrimination.

The broader context in which the project is integrated are anti-discrimination activities within the EU. The managing ideas of these activities are included in the Handbook on European Anti-Discrimination Law. To this context belong also the Anti-Discrimination Acts in the respective V4 countries and their implementations. The conference is aimed primarily at the V4 region but contributions from wider geographical space will be welcomed too.

What could be the solution?

We believe that an in-depth understanding and analysis of discrimination practices helps to overcome them. The current science knowledge of the language confirms that it participates, directly or indirectly, in the creation of culture and social relations. General findings in our field point to four ways of fighting discrimination:

Scientific knowledge can change the society. It is necessary to deal with the information management and with rational and emotional response of members of the society towards potential objects of discrimination. Interpretive competence and sensitization are directly related to the communication culture linked with the question of how to inform the public so the individuals would not consider members of marginalized groups as a threat to their own community, identity or personal welfare.


The conference will enable spreading of original research outcomes from the V4 region and initiate scientific dialogue which may lead to new scientific projects. Our partners and our team have studied discrimination and its circumstances for many years individually and our conference brings us together in order to share our knowledge and opens ways for future collaboration.

What is the conference's innovative element?

Unlike other approaches to language discrimination the conference goes beyond the registration of language units considered as discriminative. With the knowledge from the field of sociolinguistics, ethnolinguistics, social psychology, sociology, philosophy we focus on language processing connected with cognitive processes of distinction, interpretation, social and language attitudes etc. The main contribution of the conference is connection of the research on V4 regional languages in discourse which develop in specific social conditions and in specific language situations.

The V4 countries are based on the same cultural and intellectual values and common spiritual traditions that contribute to the development of individual countries. We believe that discriminatory manifestations in the V4 region have similar cultural basis. On the other hand, countries and languages of V4 are different enough, so in addition to similar manifestations of language discrimination we can also register its specific characteristics which are also relevant. Solution of language issues as specific cultural issues can help reduce discrimination.

The project is co-financed by the Governments of Czechia, Hungary, Poland and Slovakia through Visegrad Grants from International Visegrad Fund. The mission of the fund is to advance ideas for sustainable regional cooperation in Central Europe.